The “Mother of all Demos”. Douglas Englebart’s Vision of the Future 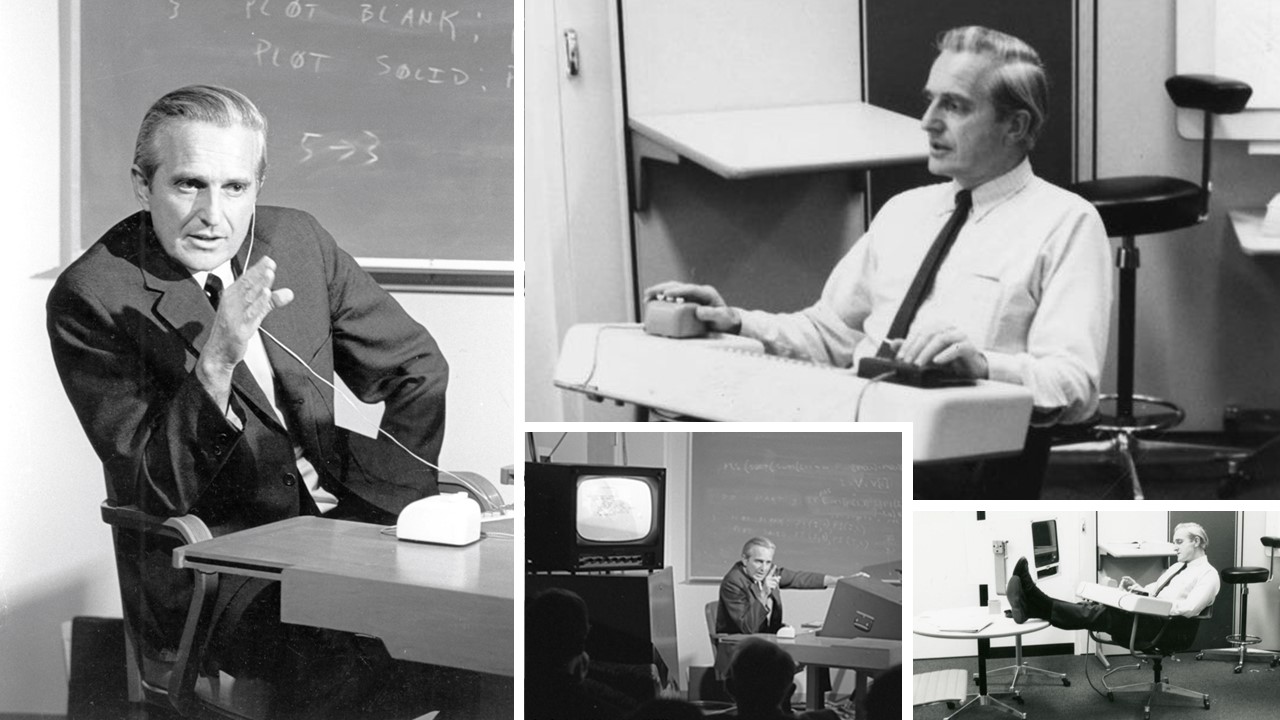 The “Mother of all Demos” is the name retrospectively used by journalist Steven Levy, in his 1994 book ‘Insanely Great’, to describe a revolutionary demonstration held on a rainy Monday, 9th December 1968, at Brooks Hall Auditorium in San Francisco. This computer conference was pivotal for the future of modern computing, and attended by people who would the next year see the moon landing live.

Consider this, before the presentation many in the computing community were whispering in the room, saying that Engelbart was crazy. However, by the time the demonstration ended, some were saying that he had managed to “deal lightning with both hands”, even though immediately following, the impacts were not so stunning; everything that Engelbart had presented was considered too futuristic for that time, however highly interesting.

The demonstration didn’t last long, just 91 minutes, but in that hour and a half, the oN-Line System (acronym NLS) was presented – a revolutionary computer collaboration system developed in the 60s. It was designed by Douglas Engelbart and implemented by researchers from the Augmentation Research Center at the Stanford Research Institute, financed by ARPA, the predecessor of the US Defense Advanced Research Projects Agency.

Engelbart was dressed in a simple white shirt, and wore a headset with a microphone (not dissimilar to those used in call centres today). His words resonated in the large hall, while he showcased the wonders of technology from his Herman Miller Company-designed workstation to the astonished crowd.

For the presentation, the team leased the Eidophor video projector, on loan from NASA. It was housed in a cupboard almost two metres tall, and had a resolution of 875 lines. The projector was also directly linked to the laboratory in Menlo Park by two high-speed modems with 1200 baud – we’re talking about 1968, guys!

Engelbart’s keyboard and mouse were connected to the Menlo Park lab, where there was an SDS-940, the first computer designed for timesharing that hosted the NLS system. It would process the commands sent by Engelbart, and relayed them to Brooks Hall Auditorium in San Francisco.

The NLS system was designed by thinking outside the box, thinking about the future. Inside the system were all of the modern personal computing elements, such as an operating system with windows, hypertext links, the concept of videoconferencing, text processing through specific software equipped with revision of the text itself, the mouse and much more.

A glimpse of the next ARPAnet network

Engelbart also hinted at the possibility that within a short time, all that he had presented would be made possible – even remotely (imagine that!) – by using the experimental network ARPAnet.

Finishing the presentation, Engelbart had not been able to discern what had been happening in the audience, as he had been constantly dazzled by the spotlight. However, at the end of the presentation he had a sigh of relief, as it concluded with a standing ovation and seemingly endless applause.

The San Francisco Chronicle headlined “The Fantastic World of Computers to Come”, but this demonstration was so influential that it gave rise to parallel projects such as the Xerox PARC in the early 70’s. However above all, many of Engelbart’s ideas decisively influenced later operating systems like the mouse, and the user interfaces of Apple Macintosh and Microsoft Windows between the 80’s and 90’s.

On the occasion of the demonstration’s 30th anniversary, in 1998, Stanford University celebrated Engelbart’s visionary ideas on computers and the World Wide Web.

The Legacy of “The Mother of All Demos”

The “Mother of All Demos” brought the world’s attention to computers, as they had been thought of up until that moment, yet to develop further. They had to evolve and surpass themselves, and initiate a quantum leap – from mere numerical computers – to interactive systems of communication and information manipulation.

Today, all this would be nothing sensational, but we should remember that we are speaking about over 50 years ago when no one even had a computer in their house. All of this, for those who participated in the event, was a mystical and visionary experience, as well as one of science fiction all at the same time.